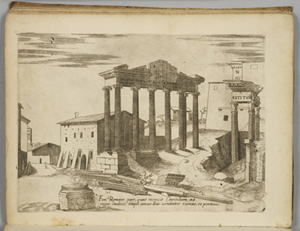 This item consists of two works bound together in one volume.  The first is a collection of 100 engraved plates of Roman sculpture beginning with the Laocoön.  Its author, Giovanni Battista Cavalieri, worked in Rome as both a publisher and engraver.  Around the year 1561, Cavalieri began publishing prints of antique statuary that were collectively bound as a set of 58 prints with the title Antiquarum statuarum urbis Romae, Liber Primus.  He subsequently published this second edition with 100 engravings, and later still a Tertius and Quartus Liber.

The second work is listed in numerous bibliographies as one of the most important 16th century sets of engravings on Roman architecture.  Dosio, a sculptor and architect, recorded views of buildings within their contemporary Renaissance surroundings and in their present state rather than attempting at reconstructions.  In addition to selecting the 50 buildings represented, Dosio provided architectural descriptions that are engraved in each plate.  The engravings themselves were done by Giovanni Battista Cavalieri, providing cohesion to the volume.