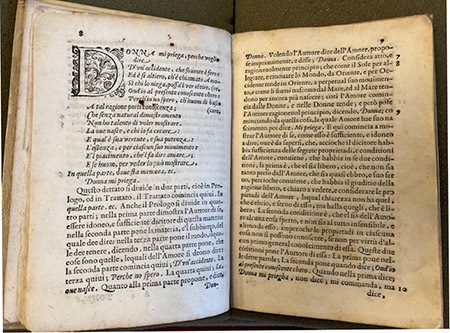 The Department of Rare Books & Special Collections has recently acquired the following items:

The first of these acquisitions, published at the start of the 17th century, is the earliest volume devoted specifically to the poetry of Guido Cavalcanti. Cavalcanti’s poems initially appeared in print in 1527 within a collection of Tuscan poetry by various authors; a copy of this volume, titled Sonetti e canzoni di diuersi antichi autori toscani in dieci libri raccolte, is also held by Rare Books & Special Collections. A thorough study of the complete works of Cavalcanti from manuscript sources was first undertaken by the Sienese scholar Celso Cittadini (1553-1627), whose efforts formed the basis of the edition printed in 1602. Included in this volume is also commentary attributed to Giles of Rome (in Italian Egidio Romano, or Egidio Colonna, c. 1243-1316).

Ezra Pound’s own sonnet “To Guido Cavalcanti” was published along with a free translation of Cavalcanti’s “Chi è questa che vèn” in his early volume of poetry titled Canzoni in 1911. Pound’s interest in Cavalcanti’s poetry and language extended over the next several decades. Pound intended to publish a “Complete Works of Guido Cavalcanti” of his translations with facing Italian texts in 1929 but this work was abandoned upon the bankruptcy of its publisher, Aquila Press. Pound then had portions of this work printed at his own expense and the volume, complete with the initial pages produced by Aquila including Pound’s translation and commentary on “Donna me prega,” was released in January of 1932. This bibliographic oddity rescued “from the ruins,” recently acquired by Rare Books & Special Collections, is a true rarity and greatly sought by collectors.