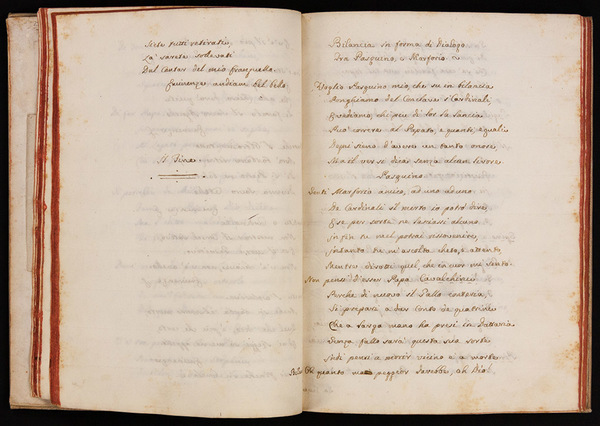 A sede vacante– the period between a pope’s death and the election of his successor– was historically a period of disorder and transgression within the city of Rome, during which the deceased pope and other figures of authority were lampooned in songs and poetry. Chief amongst these compositions were pasquinades, or satirical poems that were pasted onto the fragmentary statue of Pasquino near the Piazza Navona. Once posted on Pasquino or one of the city’s other statue parlanti, verses were copied by hand and circulated via manuscript copies as censorship efforts prevented them from being disseminated through print.

This manuscript preserves 61 poems of anonymous authorship–  most of which are unpublished–  dating from the sede vacante of 1769 that followed the death of Clement XIII. The manuscript contains satires in verse and comic sonnets on themes including nepotism, the lack of qualifications of papal candidates, and laments of Saint Peter on the contemporary state of the church. It is particularly rich in pasquinades, including witty dialogues between the statues of Pasquino, Marforio, Madama Lucrezia, Abbot Luigi, Il Babuino, and Il Facchino.