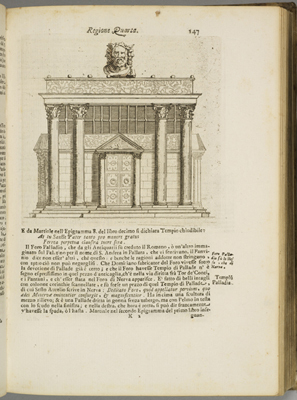 This popular guide to classical Rome was first published in 1655 and went through many subsequent reprintings.   One of the best guides of its time to ancient sources, it reproduces maps and plans, inscriptions, and numismatics that document Rome’s historical development.   This second edition of 1704 reproduces the same plates and figures as the first edition.

Published five years after Nardini’s death, the volume was edited by Ottavio Falconieri.  Falconieri’s contributions to the second edition include a discorso on the pyramid of Cestius and a lettera on an inscription found in a 1661 restoration of the portico of the Pantheon.