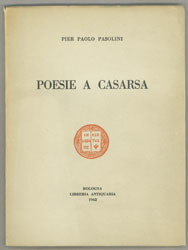 Over the past few years, the Department of Rare Books and Special Collections has greatly increased its holdings in Italian dialect poetry.  First printings of dialect poetry collections are generally published in small editions, usually ranging from 50 to 300 copies, and are therefore not often held by libraries in the United States.

Although Italy has always had a tradition of dialect poetry, the 20th century saw a proliferation of poets who rejected standard Italian and instead chose to write in a local dialect to better capture reality. The modern revitalization of the dialect tradition owes much to Pier Paolo Pasolini who made his literary debut at age 20 with the Friulian dialect poems Poesie a Casarsa, a copy of which was recently acquired by Special Collections.  This copy is number 81 of an edition of 300 numbered copies.