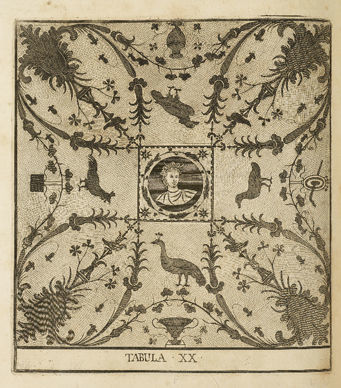 The tomb of Quintus Nasonius Ambrosius was unearthed in the year 1674 during excavations of the Via Flaminia.  One of the most significant archaeological discoveries of its time, the tomb was initially believed to be that of the poet Ovid.  It is described here by Giovanni Pietro Bellori, a leading theorist of classicism who would later become curator of antiquities for Pope Clement X.  Pietro Santi Bartoli, a draughtsman and painter, produced a visual record of the tomb’s frescoes and other decorations included within the volume.

This copy comes from the first Latin printing of the text, translated from an Italian edition of 1706.  The edition includes an examination of the frescoes found within the Domus Aurea, the remains of which were first discovered in the late 15th century and inspired numerous Renaissance artists including Raphael.   Also included is a third work written by Michel Ange de La Chausse that documents several Roman and Etruscan tombs.