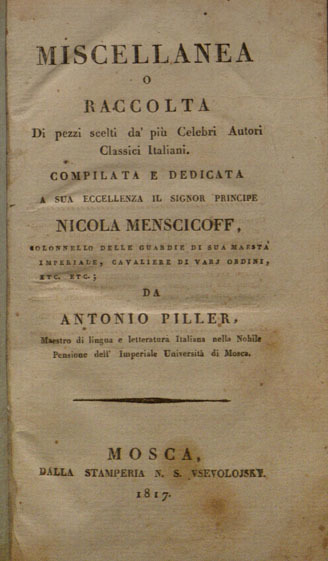 This is the first and only edition of an anthology of Italian literature that marks the initial appearance of Dante in print in Russia.  The volume is divided into three sections, all arranged chronologically: the first containing prose works by Boccaccio, Sannazzaro, Machiavelli and others; the second containing poetry by Dante, Petrarch, Bembo, Ariosto, Tasso, etc.; and the third containing selections from ‘poeti moderni’ including Metastasio, Parini and Alfieri.

The Divine Comedy was unknown to many Russian readers until the early 20th century.  The first compete prose and verse translations of Inferno were published in 1842 and 1845, respectively, and the entirety of the Commedia did not appear in translation in print until 1907.

This volume contains selections of Inferno and Purgatorio; Inferno is represented through portions of cantos III, V, and XXXII, and Purgatorio through portions of cantos I and VI.  The volume’s contents were compiled by Antonio Piller, described on the title page as ‘Maestro di lingua e letteratura Italiana nella Nobile Pensione dell’Imperiale Università di Mosca.’  With this acquisition, Notre Dame appears to be the only holder of this volume within the United States.