This rare suite of etchings containing views of ten churches was perhaps created for a market of French pilgrims undertaking a trip to Rome.  The churches include San Paolo fuori le Mura, Santa Croce in Gerusalemme, San Giovanni in Laterano, Santa Maria Maggiore, San Lorenzo fuori le Mura and Santa Maria del Popolo.  Also present is a contemporary depiction of St. Peter's Basilica including one of Bernini’s bell towers but prior to the construction of the colonnade.

Israel Sylvestre was a French draftsman who specialized in exterior perspectives of well-known buildings.   He made his first of three trips to Italy between 1638-1641 and must have prepared drawings for these etchings during this time.  Construction on Bernini’s north bell tower, shown as scaffolding in Sylvester’s design, began in 1641 and was dismantled in 1646. 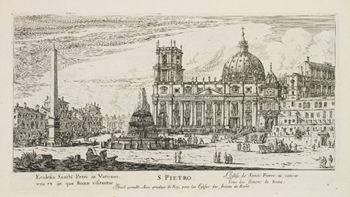