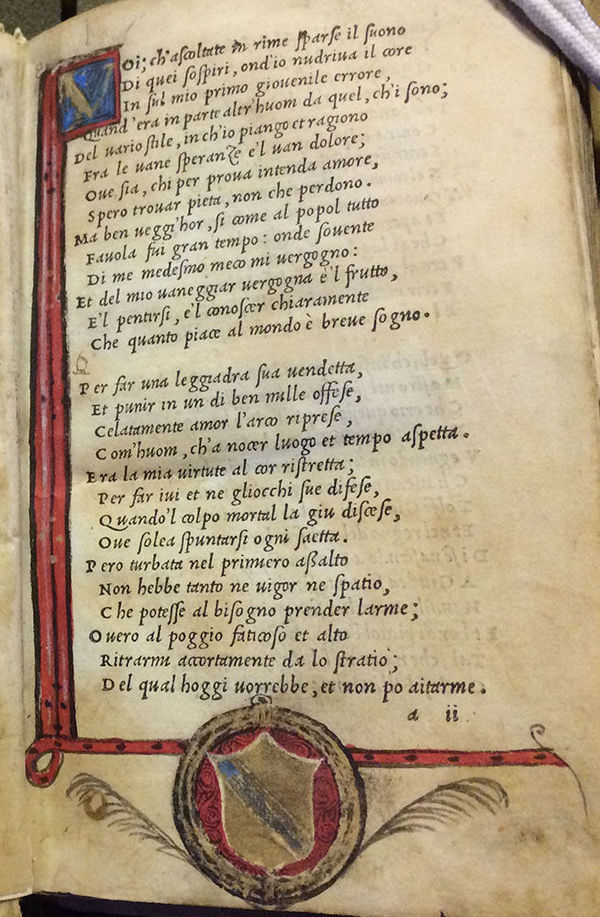 In 1501, the printer Aldus Manutius embarked upon a new publishing venture to produce libelli portatiles, or portable copies of classical and contemporary texts. The first text to be printed was an edition of Virgil in April 1501, followed closely by this edition of Petrarch’s vernacular poetry in July of the same year. Such editions, published in pocket size – or octavo – and without commentary, revolutionized printing and reading in the Renaissance.

Notre Dame has recently acquired one of a subset of copies of this edition that contain an added signature (sig. B) discussing Bembo’s method of preparing the text for printing. In his role as the editor of Petrarch’s works (and of an edition of Dante’s Commedia later published by Manutius in 1502), Bembo departed significantly from the accepted practice of reworking previous and potentially corrupt print editions, instead utilizing authoritative manuscript copies. Bembo’s professional work with such texts provided him with a starting point from which to approach his own scholarly investigations of language and the vernacular tradition.

This particular copy contains hand painted initials throughout the text. The first page of text (leaf aii) has an illuminated v with a long extender leading to an armorial shield at the foot of the page. The acquisition of this volume is exceptionally significant for the Department of Rare Books and Special Collections, considerably enriching its existing holdings in early Italian literature.