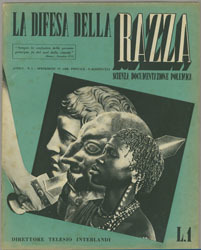 Published biweekly from August 5, 1938, to June 20, 1943, La difesa della razza (The Defense of the race) encouraged a new consciousness of racial politics among the literate Italian populace.  Distributed widely through public schools, universities, and libraries, the publication was designed to closely resemble a journal of popular science with contributions from anthropologists, biologists, sociologists and historians.  Its primary objective, however, was to disseminate the Fascist government’s agenda of anti-Semitic politics and propaganda.

The Department of Rare Books and Special Collections recently purchased a nearly complete run (117 of 118 issues) of the periodical ranging from Year I, no. 1 (5 August 1938) to Year VI, no. 15 (5 June 1943).  The set is missing its final issue but this will be added to the collection when a copy becomes available on the market.