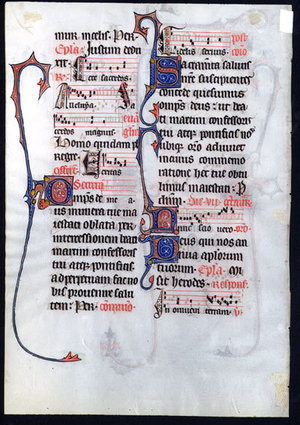 For anyone interested in the sale of medieval manuscripts, there can be no more fascinating subject than the Cleveland rare book dealer, Otto Frederick Ege (1888-1951). From the 1930s until his death at age 63, he literally invented the middle class ownership of medieval and Renaissance manuscript pages. If you’ve seen framed manuscript leaves in American homes, you can thank Otto Ege. That is, if you want to “thank” someone who cut up more than 200 manuscripts and substantial fragments, selling over 10,000 individual pages to middle class American “connoisseurs” of pre-modern book arts. Trafficking in book-murder may sound criminal, but Ege escaped justice. In his lifetime he was esteemed as a beloved local saint with a national reputation as an inspiring teacher and manuscript expert. Everyone knew that he cut up manuscripts, and almost everyone wanted in on it.

This illustrated lecture will trace Ege’s biblioclasm from the launch of a commercial outlet for manuscript fragments at the Lima Public Library, Ohio, to the establishment of his international brand.

Scott Gwara is Professor of English Language and Literature at the University of South Carolina.