Were the Italian humanists of the Quattrocento philosophers, nascent philologists, or both? How can the study of Marsilio Ficino help us answer this question? With the exception of a very small but growing group of Renaissance scholars who could not only read Ancient Greek but had access to the Greek manuscripts of Plato and Plotinus, most readers in the Latin West encountered these texts through Ficino’s translations and commentaries. Ficino’s versions of Plato and Plotinus still remained dominant well into the 1800s, when diverse philologists like A. I. Bekker and G. F. Creuzer found them sound enough to publish along with the Greek text of their critical editions. This talk proposes to analyze case studies of Ficino's textual practices illustrating how he worked with Greek manuscripts to arrive at a printed Latin edition of the text. For example, it will show the humanist collating, doubting, and debating marginal variants in his Greek manuscripts, emending the text, and proposing exegetical and textual conjectures. Such a study does not explain Ficino’s finished work so much as delve into some of the philosophical and philological processes behind it. 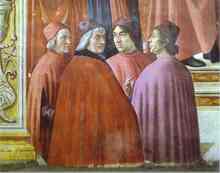 Denis Robichaud is Assistant Professor in the Program of Liberal Studies at Notre Dame. He works on Italian Humanists, including philosophy, philology, and rhetoric in the Renaissance. He has published on Marsilio Ficino, as well as Angelo Poliziano and Neoplatonic commentaries. His current research engages with various aspects of Renaissance humanism: the history of philosophy and philology, humanist commentary and textual practices (reading and writing), manuscript annotations, Ficino, Poliziano, Gianfrancesco Pico della Mirandola, and the fortune of classical and humanist texts. In 2012, he was a Frances A. Yates Fellow at the Warburg Institute in London, England.