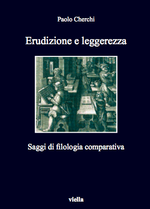 Erudizione e leggerezza. Saggi di filologia comparativa is a collection of essays presented to Paolo Cherchi for his 75th birthday, and it has been introduced and edited by Giuliana Adamo. This selection of essays highlights two outstanding aspects of Cherchi's distingushed scholarship, namely his unusual learning and its equally unusual lightness or elegance in presenting it. Paolo Cherchi's vast research spans from Medieval to modern times in several areas, mostly Romance Languages to Modern literary Theory. His approach is unique in that he often leads his philological research to comparative literature conclusions: for example showing how Petrarch quotes his sources and haw can a philologist trace them; how a Spanish mythographer Villena uses Italian chronist Guido da Pisa and how this source has an impact on his way of understanding a mythological story; how the New-Provençal poet Mistral translates Petrarch; how France and Italy experience their querelle des anciens et des modernes; or how Anglo-American textual criticism differs from the Italian one and what they both share. The essays collected in this volume deal with some of these topics and at every step they give a sample of how philological research can be fascinating and enjoyable even for today's young students.