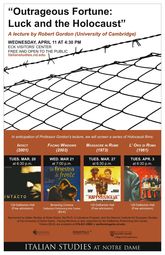 In this lecture, co-sponsored by the Nanovic Institute for European Studies and the PhD in Literature Program, Robert Gordon looks at an array of different responses to the Holocaust - in books, films, popular science, and the work of survivors such as Imre Kertesz and Primo Levi - to make sense of the strange and compelling role played by luck in our understanding of this most appalling of historical events.  What remains of our common conceptions of good and bad luck after the horrors of the concentration camps?

In anticipation of Professor Gordon's Lecture, Italian Studies at Notre Dame is hosting a series of films. The schedule is as follows:

Robert Gordon, Professor of Modern Italian Culture at Cambridge University, has published widely on 20th-century Italian literature, cinema and cultural history. He is the author or editor of several books on the work of Primo Levi, including Primo Levi's Ordinary Virtues, Auschwitz Report, and The Cambridge Companion to Primo Levi. He is co-editor of Culture, Censorship and the State in 20th-Century Italy and his study of cultural responses to the Holocaust in Italy will appear in June 2012. His work on cinema includes the books Pasolini. Forms of Subjectivity and Bicycle Thieves, DVD and blu-ray audio commentaries on Pasolini's Teorema and Bicycle Thieves, and articles and essays on Holocaust cinema, early film and literature, 'Hollywood on the Tiber', and censorship.

Professor Gordon's latest book, The Holocaust in Italian Culture, 1944–2010, is the first major study of how postwar Italy confronted, or failed to confront, the Holocaust. Fascist Italy was the model for Nazi Germany, and Mussolini was Hitler's prime ally in the Second World War. But Italy also became a theater of war and a victim of Nazi persecution after 1943, as resistance, collaboration, and civil war raged. Many thousands of Italians—Jews and others—were deported to concentration camps throughout Europe. After the war, Italian culture produced a rich array of stories, images, and debate through which it came to terms with the Holocaust's difficult legacy. Gordon probes a rich range of cultural material as he paints a picture of this shared encounter with the darkest moment of twentieth-century history. His book probes aspects of Italian national identity and memory, offering a new model for analyzing the interactions between national and international images of the Holocaust.