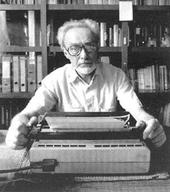 "The Butterfly's Face: Ethical Encounters with the Animal Other," a lecture on Primo Levi by Lina Insana, Associate Professor of Italian at the University of Pittsburgh. Thursday, March 1 at 4:00pm in Special Collections in the Hesburgh Library.

Primo Levi (1919-1987) is perhaps best known for his account of the time he spent in Auschwitz, Se questo è un uomo, (If This Is A Man [Survival In Auschwitz], 1947/1958); but in fact was a prolific writer whose poetry, essays, and science fiction extend, revisit, and even contest his better-known and more explicitly Holocaust-focused writing. Levi’s oeuvre is populated not only with personal tales of persecution and suffering, but also with dreamers, scientists, workers, automatons, machines, and an incredible array of fancifully-drawn animal characters. One of the most striking of these is the butterfly, an image that Levi draws on in texts that range from science fiction short story to creative autobiography to occasional newspaper essay; the implications of this cumulative meditation on worms, butterflies, and what lies between them are both far-ranging and under-explored. Building on the recent work of Levi scholars who have begun to sketch out a comprehensive ethical program in Levi’s work, this talk aims to trace Levi’s use of worms and butterflies to explore not only the Nazi genocide of Jews, but also the ethical dynamics at play in the Jew’s—indeed, the world’s—response to that genocide.