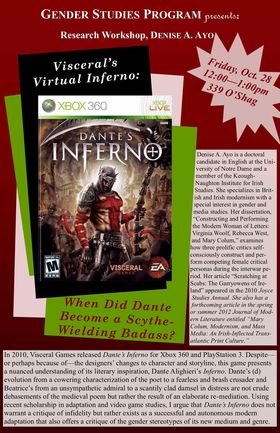 In 2010, Visceral Games released Dante’s Inferno for Xbox 360 and PlayStation 3. Despite—or perhaps because of—the designers’ changes to character and storyline, this game presents a nuanced understanding of its literary inspiration, Dante Alighieri’s Inferno. Dante’s (d)evolution from a cowering characterization of the poet to a fearless and brash crusader and Beatrice’s from an unsympathetic admiral to a scantily clad damsel in distress are not crude debasements of the medieval poem but rather the result of an elaborate re-mediation. Using recent scholarship in adaptation and video game studies, I argue that Dante’s Inferno does not warrant a critique of infidelity but rather exists as a successful and autonomous modern adaptation that also offers a critique of the gender stereotypes of its new medium and genre.

Denise A. Ayo is a doctoral candidate in English at the University of Notre Dame and a member of the Keough-Naughton Institute for Irish Studies. She specializes in British and Irish modernism with a special interest in gender and media studies. Her dissertation, “Constructing and Performing the Modern Woman of Letters: Virginia Woolf, Rebecca West, and Mary Colum,” examines how three prolific critics self-consciously construct and perform competing female critical personas during the interwar period. Her article “Scratching at Scabs: The Garryowens of Ireland” appeared in the 2010 Joyce Studies Annual. She also has a forthcoming article in the spring or summer 2012 Journal of Modern Literature entitled “Mary Colum, Modernism, and Mass Media: An Irish-Inflected Transatlantic Print Culture.”