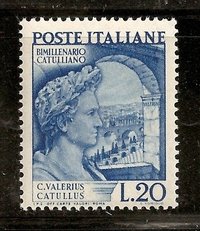 Matthew Wright from the Unversity of Exeter and a Blegen Distinguished Visiting Research Professor, Vassar College, will be giving a talk on Catullus and his poems on Wed Sep 28, 2011, from 5:00 - 6:00PM in 218 Main Building

Professor Wright recently completed a new book, The Comedian as Critic, which will be published by Duckworth this year: this is a major new study of the relationship between comedy and poetic theory in the fifth century BC, incorporating discussion of many fragments of lost plays by Platon, Hermippus, Cratinus, Eupolis, Metagenes and others.

His other publications include numerous articles and reviews, as well as the books Euripides' Escape-Tragedies ('Voici un ouvrage très stimulant pour l'esprit... La satisfaction intellectuelle est entière' - Revue des études grecques) and Euripides: Orestes ('Wright's fine introductory treatment highlights the richness, complexity and entertainment value of the play in a way that should benefit both the book's primary intended audiences - students and theatre practitioners - and more advanced scholars... it deserves a place in the library of nearly every institution in which Classics and/or classical theater are taught' - Classical Journal).

He is an active member of the Classical Association (at local and national levels), a Fellow of the Higher Education Academy, a committee member of the Council for UK Classics Departments (CUCD), a Council Member of the Hellenic Society, a member of the editorial board of Omnibus, and Reviews Editor of the Journal of Hellenic Studies.