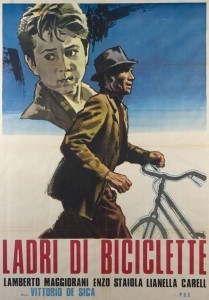 After their bicycle is stolen, a man and his son desperately search the streets of Rome to recover it. An accomplished film actor, director Vittorio de Sica became one of the key figures of Italian Neorealism casting nonprofessional actors and shooting on location in this moving portrait of post-war economic struggle.

Thank you to the Meg and John P. Brogan Endowment for the Classic 100 Film Series.