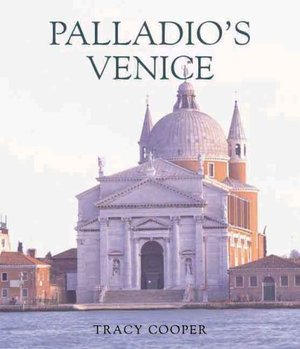 On Monday, April 11 at 4:30 pm in 104 Bond All, Tracy Cooper, professor at the Tyler School of Art, Temple University will give a lecture titled "Palladio's Venice."

Dr. Cooper's Palladio's Venice: Architecture and Society in a Renaissance Republic (Yale University Press, 2006), was selected as a 2007 AAUP University Press Book for Public and Secondary School Libraries, won the Renaissance Society of America's 2007 Phyllis Gordan Prize, and received an honorable mention for the 2006 Premio Salimbeni.

Celebrated Renaissance architect Andrea Palladio (1508–1580) devoted much of his career to the city of Venice. Famous for public buildings he had designed in his native Vicenza and country villas he had built for wealthy patricians there, he arrived in Venice in the mid- 1550s confident of establishing a successful new practice. Yet Palladio’s Venetian career never matched his lofty expectations. Failing to achieve the position of state architect or to earn the kinds of commissions to which he was accustomed, he found himself working in a category new to his practice: ecclesiastical architecture. It was his stunning churches, however, including San Giorgio Maggiore and Il Redentore, that established Palladio’s lasting renown.

In this fascinating and beautifully illustrated book, Tracy E. Cooper organizes Palladio’s work in Venice according to different types of patrons. She discusses his major monuments as well as less well-known work for charitable foundations, convents, triumphal processions, and the rebuilding of the Ducal Palace. She tells the compelling story of an established architect breaking into a new market and of a Renaissance city in the midst of sweeping change.

Dr. Tracy E. Cooper (Princeton University, 1990) is Professor of Italian and Southern Renaissance and Baroque art and architecture. Her specialization is Venetian and early modern cultural history, with particular interests in architecture/ urbanism and patronage studies. Her new book "Palladio’s Venice: Architecture and Society in a Renaissance Republic," Yale University Press, London and New Haven (2005) has had major interdisciplinary impact, been widely reviewed, and is the recipient of prestigious awards. She has received fellowships from the Center for Advanced Study in the Visual Arts, National Gallery of Art, the Gladys Krieble Delmas Foundation for Venetian Research, and the Eli Lilly Endowment, as well as numerous university and college grants. She has spoken and published widely in English and Italian on early modern architecture and culture, and recently was a member of the interdisciplinary graduate faculty of Venice International University (a collaboration of Duke University and IUAV di Venezia) in Venice, and of the Centre for Acoustic and Musical Experiments in Renaissance Architecture (CAMERA), at the University of Cambridge (UK), as well as the forthcoming international collaborative project “Printing and its Publics in Early Modern Italy.” Her involvement in museum work continues as she is on an advisory committee for a future exhibition on Titian, Tintoretto, and Veronese at the Boston Museum of Fine Arts. She has been a leader in technology adoption at the college and university and works to keep global education in the forefront of university policy and to promote student experiences abroad at all levels. Her concerns about international education and the incorporation of teaching with technology are addressed in course content, assignments, and digital delivery: she hopes to inspire her students to take advantage of Temple’s global offerings and new technologies as well as original resources for research.