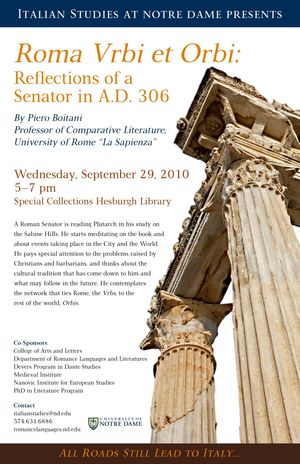 A Roman Senator is reading Plutarch in his study on the Sabine Hills. He starts meditating on the book and about events taking place in the City and the World. He pays special attention to the problems raised by Christians and barbarians, and thinks about the cultural tradition that has come down to him and what may follow in the future. He contemplates the network that ties Rome, the Vrbs, to the rest of the world, Orbis.

This is the first of two talks. The second one will be delivered in Rome in June, 2011, at the Rome Seminar, and will contain the Reflections of the same Senator around 330-340 AD.

Professor Boitani has authored a great number of books, including Chaucer and Boccaccio, English Medieval Narrative of the 13th and 14th Centuries, The Tragic and the Sublime in Medieval Literature, The Shadow of Ulysses: Figures of a Myth, The Bible and its Rewritings, and, with Notre Dame University Press, The Genius to Improve an Invention. His most recent books include Parole alate (Mondadori, 2004), The Cambridge Companion to Chaucer (Cambridge University Press, 2004), Winged Words: Flight in Poetry and History (The University of Chicago Press, 2007), Letteratura europea e Medioevo volgare (Il Mulino), and Il Vangelo secondo Shakespeare (Il Mulino).