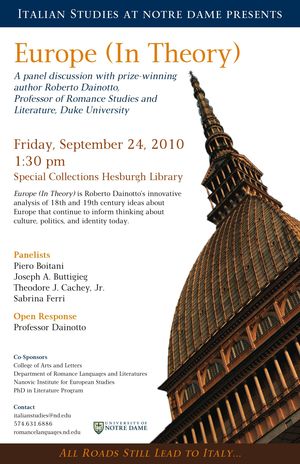 Friday, September 24, Roberto Dainotto will participate in a panel discussion of his prize-winning book Europe (In Theory) at 1:30 in Special Collections at the Hesburgh Library.

Europe (in Theory) is an innovative analysis of eighteenth- and nineteenth-century ideas about Europe that continue to inform thinking about culture, politics, and identity today. Drawing on insights from subaltern and postcolonial studies, Roberto M. Dainotto deconstructs imperialism not from the so-called periphery but from within Europe itself. He proposes a genealogy of Eurocentrism that accounts for the way modern theories of Europe have marginalized the continent’s own southern region, portraying countries including Greece, Italy, Spain, and Portugal as irrational, corrupt, and clan-based in comparison to the rational, civic-minded nations of northern Europe. Dainotto argues that beginning with Montesquieu’s The Spirit of Laws (1748), Europe not only defined itself against an “Oriental” other but also against elements within its own borders: its South. He locates the roots of Eurocentrism in this disavowal; internalizing the other made it possible to understand and explain Europe without reference to anything beyond its boundaries.

Dainotto synthesizes a vast array of literary, philosophical, and historical works by authors from different parts of Europe. He scrutinizes theories that came to dominate thinking about the continent, including Montesquieu’s invention of Europe’s north-south divide, Hegel’s “two Europes,” and Madame de Staël’s idea of opposing European literatures: a modern one from the North, and a pre-modern one from the South. At the same time, Dainotto brings to light counter-narratives written from Europe’s margins, such as the Spanish Jesuit Juan Andrés’s suggestion that the origins of modern European culture were eastern rather than northern and the Italian Orientalist Michele Amari’s assertion that the South was the cradle of a social democracy brought to Europe via Islam.