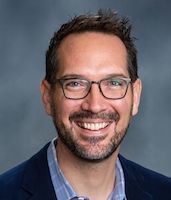 David Lummus joined the Center for Italian Studies in 2018. He coordinates on-campus events and international collaborations, oversees communications and operations, and supports special initiatives and strategic planning at the center. He is also a visiting assistant professor of Italian Studies in the Department of Romance Languages and Literatures.

His research on Boccaccio, Petrarch, and the Italian fourteenth century has been published in journals such as Medievalia et Humanistica, Speculum, Mediaevalia, and Renaissance Quarterly as well as in books like the Cambridge Companion to Boccaccio and Boccaccio: A Critical Guide to the Complete Works.

His monograph, The City of Poetry: Imagining the Civic Role of the Poet in Fourteenth-Century Italy (Cambridge 2020) was awarded the 2019 Aldo and Jeanne Scaglione Publication Award for a Manuscript in Italian Literary Studies by the Modern Language Association (press release).

He has co-edited a book with Martin Eisner titled A Boccaccian Renaissance: Essays on the Early Modern Impact of Giovanni Boccaccio and His Works (Notre Dame 2019) and is the editor of The Decameron Sixth Day in Perspective, forthcoming with the University of Toronto Press in June 2021. He is also a member of the editorial board of Dante Studies, the journal of the Dante Society of America, for 2020-2022.