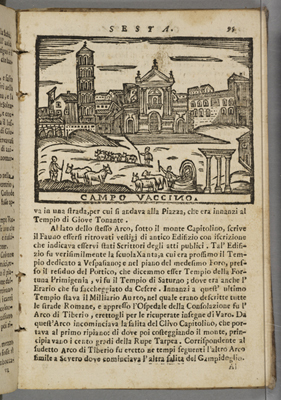 This charming guidebook features descriptions and illustrations of ancient and modern buildings of Rome.  Many architectural sites are illustrated with woodcut prints, including Palazzo di S. Spirito, Piazza Navona, Palazzo Farnese, the Coliseum, and Campo Vaccino, the last of which dutifully includes several herds of cattle for scale.   Some illustrations in this copy have also been partially colored by a heavy-handed individual.

A publication history for a text such as this is difficult to trace, as texts were issued over and over again with diverse paginations.   Exiting copies reveal that the year 1750 saw at least three different printings of this text, all with different pagination.