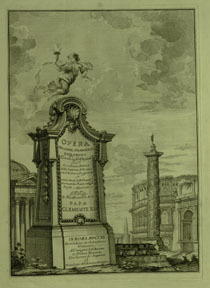 The Architecture Library has recently acquired the following item:

This scarce publication, published 50 years after the architect’s death, documents the beauty and complexity of Francesco Borromini’s masterpiece S. Ivo della Sapienza at the Università di Roma.   Building began on the university chapel in the year 1642 but events such as the ascension of Pope Innocent X in 1644 and preparations for the Holy Year of 1650 delayed completion of the dome until the early 1660s.  Now recognized as a masterpiece of Roman Baroque style, the building features a highly original configuration of the ground plan, a soaring and uninterrupted dome and innovative natural lighting.

Demonstrating the zenith of Borromini’s oeuvre, the volume reproduces 47 plates engraved after the architect’s drawings.   Its publication marked the beginning of a revival of interest in Borromini’s work and helped him emerge from the shadow of his close contemporary Gian Lorenzo Bernini.