A major work of urban cartography, Giovanni Battista Nolli's achievement ranks as one of the greatest eighteenth century plans of any European city.  The volume features 12 double-page engravings that comprise the most detailed and accurate plan of early modern Rome, compiled by Nolli between 1730-1742.  Every church and palazzo and additional elements such as columns, stairways, fountains, arches, and even sewer openings are included.  Also present is an index that locates over 1300 individual sites and hundreds of streets within the city.

The engravings, which form a single plan of over six by seven feet if joined, preserve a Rome little removed from its Renaissance form.  Wide areas of the city within the ancient walls are occupied by villas with extensive fields, orchards and gardens.  Also of interest is the plan’s inclusion of many recent Baroque construction projects such as the Trevi Fountain.  Nolli’s astonishing attention to detail makes the plan an extraordinary tool for studying Rome’s rich urban relationships. 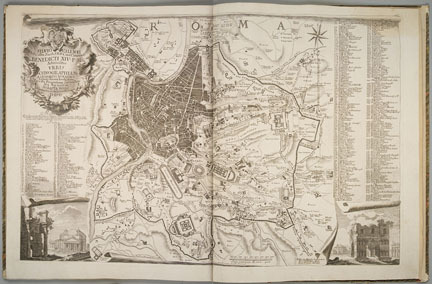