Due to Notre Dame's decision to move all courses online through at least April 13, William Caferro's lecture has been cancelled. We will share more information on rescheduling at a later date.

The Center for Italian Studies presents the fourth annual Ravarino Lecture on April 2, 2020, which will be delivered by William Caferro. 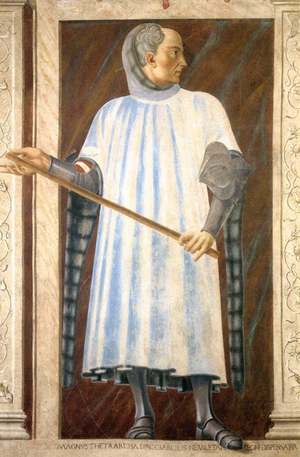 The lecture will address the varied aspects of the career of Niccolò Acciaiuoli, whom his modern biographer called an "oggetto misterioso"—a banker become a landed lord; a founder of a chivalric order, who stood at the head of mercenary armies; a man filled with grandezza, who built the Certosa in Florence for the humblest of monks (the most silent ones) but also to glorify himself; and also an Italian who is deeply connected to Greece and Byzantium, the latter a major source of his wealth. This will be discussed with reference also to Niccolo's relationship with Petrarch and Boccaccio and Zanobi da Strada. The lecture essentially takes up two distinct points Caferro has been making in his other work: that apparent contradictions should be a category of historical investigation, not smoothed over and compartmentalized and that Byzantium/Greece was close at hand and woven into economics and politics in Italy, from the time of Dante through Boccaccio.

The lecture will take place from 5:00 pm to 6:00 pm and will be followed by a reception. More details will be posted here as the date approaches.

William Caferro studies medieval European history, specializing in Italy. His research focuses on economic, military, social, literary and historiographical trends. Caferro is author of Mercenary Companies and the Decline of Siena (Johns Hopkins, 1998), John Hawkwood, English Mercenary in Fourteenth Century Italy (Johns Hopkins, 2006), which won the Otto Grundler Prize from the International Medieval Congress (2008), Contesting the Renaissance (Wiley-Blackwell, 2010) and Petrarch's War: Florence and the Black Death in Context (Cambridge, 2018), which won a book prize from the American Association of Italian Studies (AAIS). He is co-author of The Spinelli: Fortunes of a Renaissance Family (Penn State, 2001), co-editor of The Unbounded Community: Papers in Christian Ecumenism in Honor of Jaroslav Pelikan (Routledge, 1996) and editor of The Routledge History of the Renaissance (Routledge, 2017). His most recent book, Teaching History, is forthcoming in Fall 2019 with Wiley-Blackwell. Caferro’s research has been supported by fellowships from Villa I Tatti (Harvard Center for Renaissance Studies), the Institute for Advanced Study, the Italian Academy for Advanced Study (Columbia University) and the John Simon Guggenheim Memorial Foundation. He is currently a member of the Deputazione di Storia Patria di Toscana and l'Associazione di Studi Storici Elio Conti in Italy and is serving a term (2017-2019) on the Executive Council of the Dante Society of America. His current book project examines the intersection among war, culture and economy in Florence from 1337 to 1402.

Each year, thanks to the Albert J. and Helen M. Ravarino Family Endowment for Excellence, the Center for Italian Studies sponsors a public lecture by a distinguished scholar of Italian Studies.