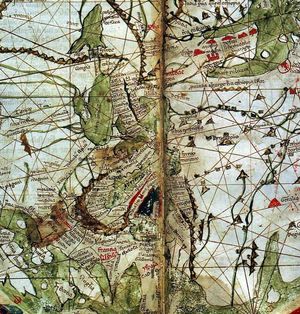 Following the publication of Il mare salato. Il Mediterraneo di Dante, Petrarca e Boccaccio (Viella 2019), Morosini will share her study of the Mediterranean in geocritical terms. The seminar will focus on the representation of the Mediterranean and its “liti,” its discordant or opposing shores, as literary spaces in the works of Dante, Petrarch, and Boccaccio. With the rising interest in Mediterranean studies as a discipline, the goal is to raise questions among students of literature about “reading” the sea in a literary text. How do we read the sea? Do we have the epistemological tools to do so? What does the sea tell us about the world the writers were living in and about their poetics? In doing so, the aim is to share the questions asked, the epistemological tools and the cultural categories used, and the approach adopted each time in Morosini's attempts to read the sea in Dante, Petrarch, and Boccaccio. Finally, references to Cristoforo Buondelmonti’s navigation to the Greek islands at the beginning of the fifteenth century contribute to showing the strong impact of medieval cartographic writing on the Renaissance island books. Buondelmonti, in fact, moves away from literary and/or metaphorical navigation, and in particular from Boccaccio’s Genealogy, in which the author would imagine traveling to the sites of ancient myth, and he truly embarks and sails to the Aegean Islands.

Roberta Morosini is professor of Italian at Wake Forest University. She is the former vice president of the American Boccaccio Association, fellow of the Villa I Tatti Harvard Center of Renaissance Studies in Florence, and the Liguria Study Center in Bogliasco. She is also a 2012 fellow scholar for the NEH Mediterranean Summer Institute, “Networks and Knowledge: Synthesis and Innovation in the Muslim-Christian-Jewish Medieval Mediterranean” and the recipient of the Luigi De Lise Culture Award (2015). Her research is centered around Medieval and Early Modern Italy in and of the Mediterranean. It focuses on issues of storytelling, reception, and modalities of narration with special attention to the relation between text and image and to the representation of spaces where stories and legends unfold. Her recent publications include: Dante, il Profeta e il Libro. La leggenda del toro dalla Commedia a Filippino Lippi, tra sussurri di colomba ed echi di Bisanzio (L’Erma di Bretschneider, 2018) and Il mare salato. Il Mediterraneo di Dante, Petrarca e Boccaccio (Viella, 2019).