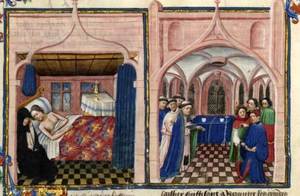 For the second meeting of the Italian Research Seminar, Prof. Ambrogio Camozzi Pistoja will give a lecture on the first and last tales of Boccaccio's Decameron.

Ambrogio Camozzi Pistoja is assistant professor in Romance Languages and Literatures (Italian) at Harvard University. His research concerns different areas of the Italian middle ages, at the intersections of literature, art, and legal history. He has completed two major book projects, both of which have grown out of work on the dissemination of texts, oral and visual materials relating to Alexander the Great in Italy from the end of the twelfth century to the end of the fourteenth century: Vita di Alessandro con figure (Brepols, 2018) and Dante and the Medieval Alexander (2019). Works in progress include a book dedicated to the literary, visual and criminal history of insults in Roman and medieval Italian societies. The project is focused around the key role of Italian city-states and the Bolognese school of law in the development of concepts such as defamation, injury, non-physical violence and freedom of speech. Camozzi Pistoja is also developing a research project on parabolic epistemology and the novel concept of ‘text as Eucharist’, a text which eludes the hermeneutic attempts of the ‘wicked’, no matter how literate or clever they might be.