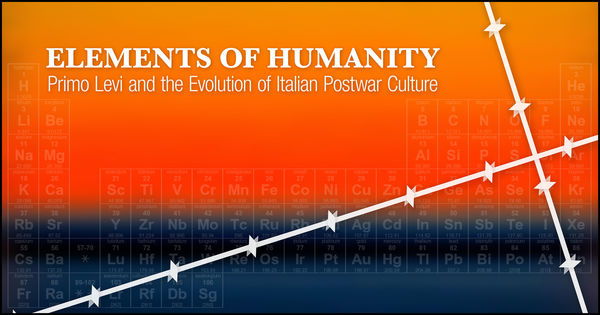 Please join us for an opening of the exhibit on September 5 at 4pm. The event will feature brief remarks by Tracy Bergstrom (Curator, Italian Imprints and Dante Collection), Vittorio Montemaggi (Lecturer, Religion and the Arts, King's College London), and Valentina Geri (PhD candidate, Italian), followed by a light reception and viewing of the exhibit.

Primo Levi (1919-1987) was the author of fiction, poetry, essays, memoirs and translations and is best known for his first work, Se questo è un uomo, an account of his detention at Auschwitz in 1944/1945. Before he was a writer Primo Levi was a chemist, and throughout his life the two identities intertwined in fascinating and mutually enriching ways, in a constant exploration of possible links between what Levi called "the world of words and the world of things." Levi's writings reflect his deep engagement with various forms of both scientific and humanistic knowledge, as well as with Jewish culture and wisdom. Governing Levi's work as a whole are a profound love of storytelling and an equally profound desire to communicate in friendship. Levi is rightly considered one of the most important authors of the twentieth century.

This exhibit traces the progression and reception of Levi’s writings in first editions from the Primo Levi Collection of the Hesburgh Libraries’ Department of Rare Books & Special Collections. The Primo Levi Collection, developed in conjunction with Italian Studies at Notre Dame, is one of the most important of its kind outside of Italy. It includes all first editions of Levi’s works published within his lifetime as well as first editions of notable translations and adaptations of Levi's writings that document his importance outside of Italy.

Co-sponsored by Italian Studies at Notre Dame and Hesburgh Libraries.

The exhibit is curated by Tracy Bergstrom, Hesburgh Libraries. It runs from August 21 to December 15. Public tours of the exhibit are offered Tuesdays at noon and Wednesdays at 3pm. Tours are also available for classes or other groups, including K-12 audiences, by request.