Steven Semes (Notre Dame) - "Another Rome: Architecture and Urbanism in the Eternal City 1918-1942"

Thursday, October 25 at 4:30pm in Special Collections in the Hesburgh Library 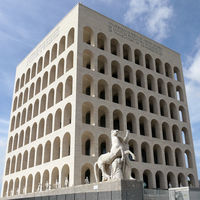 There are many Romes. This talk will introduce a Rome little known to non-Italian scholars or visitors to the city - the work of architects and urban designers practicing there during the decades of the 1920s and 30s who sought to continue inherited design traditions while at the same time adapting them to modern requirements. As the immemorial capital of Empire and Papacy entered the culminating stages of its transformation into a modern city, architects faced the dual challenges of modernity in general and the Modern Movement in architecture in particular. The work of the modernists is well known and has accumulated an extensive critical literature; this talk will present the work of the designers at the time who made continuity with the city’s architectural heritage a priority, and whose work is only recently being recognized and studied by a new generation of Italian scholars. The work of Marcello Piacentini, Gustavo Giovannoni, Armando Brasini, and Innocenzo Sabbatini - to name only a few - will be highlighted in the context of the lively debate at the time that encompassed architectural style, the future of the city, and the relationship between architecture and politics. It is a history full of  "complexity and contradiction," but more importantly, it is a fascinating body of work that is too relevant to our current debate about style, conservation, and sustainability to remain unknown.

Steven W. Semes is Associate Professor in the School of Architecture at the University of Notre Dame. From 2008 to 2011 he was Academic Director of the School’s Rome Studies Program, and in 2010 received the Clem Labine Award from Traditional Building magazine. He is the author of The Future of the Past: A Conservation Ethic for Architecture, Urbanism, and Historic Preservation (2009) and The Architecture of the Classical Interior (2004), and was a contributor to The Elements of Classical Architecture (2001), all published by W. W. Norton & Co. His articles and essays have appeared in such publications as Traditional Building, Period Homes, American Arts Quarterly, and the National Trust Forum Journal. In September 2011 he was profiled in the Wall Street Journal. He is a member of the Editorial Committee of the academic journal Change Over Time and also publishes a blog, The View from Rome. His website is www.thefutureofthepast.net. He has earned degrees in architecture at the University of Virginia and Columbia University.