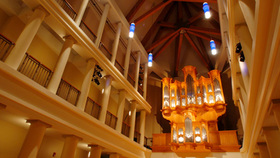 With performances described by the New York Times as “brilliant” and “flawless”, John Thiessen appears as soloist and principal trumpet with early music ensembles throughout the Untied States and Canada. Craig Cramer (Organ) is a professor in the Department of Music at the University of Notre Dame and has performed throughout the United States and in Belgium, Canada, England, France, Germany, Luxembourg, Poland, Scotland, the Czech Republic and Switzerland. Mary Anne Ballard (Viola da Gamba) is a principal with Baltimore Consort and is now on the faculty of the Oberlin’s summer Baroque Performance Institute. Currently a resident of Indiana, she has appeared recently with Indianapolis Baroque Orchestra.

Tickets are $15.00 but are reduced to $5.00 for students. To purchase tickets are to learn more about the performance, visit the homepage of the DeBartolo Center for the Performing Arts.