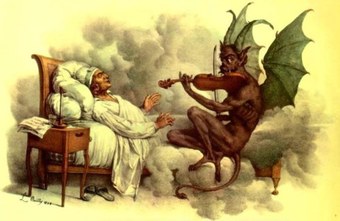 The Devil's Fiddle and the Saint's Tongue

In his Voyage d’un François en Italie (Paris 1769), the astronomer Lalande recounts that one night the devil appeared to the violinist and composer Giuseppe Tartini (1692-1770). In this dream, the devil offered the violinist a Faustian deal and then played a wonderful violin piece, which Tartini imitated in one of his sonatas. Ironically, Tartini spent most of his career as first violin and concert master at the Basilica of Saint Anthony in Padua. New documentary evidence from the Archive of the Basilica, including encrypted annotations in manuscript orchestral parts, sheds light on the enigmatic liturgical use of Giuseppe Tartini's violin concertos. An interesting case is a group of concertos, by Vivaldi and Tartini, performed in honor of the tongue of Saint Anthony. The veneration of Anthony's tongue, still preserved uncorrupted as a relic, was particularly fervent in the 18th century, strongly supported by Cardinal Rezzonico (Pope Clement XIII). In an 18th-century biography of Saint Anthony, Azevedo writes that the first miracle by this Portuguese friar was his preaching. Even though Anthony allegedly spoke only Latin and Portuguese, Italian people, even the illiterate, were moved by a rhetoric that transcended verbal signification.  Azevedo equates this miracle to Pentecost, when the apostles received the power to be understood by people of different languages. In the 18th century, the Catholic Church reengaged in this mission to overcome linguistic barriers by commissioning orchestral music (symphonies and concertos) for liturgical use. In period sources, similarly to Anthony's tongue and his preaching, Tartini's violin and his teaching in his "School of the Nations" were often praised for their power to overcome linguistic barriers. If Tartini’s dream seems to have been to produce on his violin the extraordinary effects of the Saint’s tongue, why did Lalande write that Tartini imitated the devil’s fiddle in his famous “Sonate du diable”?

Pierpaolo Polzonetti is Assistant Professor of Music and teaches Great Books seminars at the University of Notre Dame. He studied at the University or Rome “La Sapienza” and received his doctorate in music history at Cornell. He has been awarded grants by American Musicological Society, the National Endowment for the Humanities, the American Council of Learned Societies and has received the Einstein Award of the American Musicological Society for the best article by a younger scholar. He is the author of Giuseppe Tartini e la musica secondo natura (Libreria Italiana di Musica), as well as the coeditor, with Anthony DelDonna, of the Cambridge Companion to Eighteenth-Century Opera. His articles have appeared in edited volumes and journals, including Opera Quarterly, Eighteenth-Century Music, and Cambridge Opera Journal.