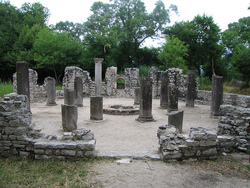 David Hernandez, Assistant Professor of Classics at Notre Dame, will be presenting his findings from his summer of excavation in Albania, where he and other Notre Dame students conducted a dig in the Roman Forum. Wed Dec 7, 2011, from 5:00 - 6:00PM in 310 DeBartolo Hall.

David Hernandez is an archaeologist of the Greco-Roman Mediterranean. Having directed large-scale field projects at Butrint and Amantia, he has extensive knowledge of excavation methods and complex urban stratigraphy. His research focuses on Roman colonization, topography, and technology generally and Greek and Roman urbanism and trade in ancient Epirus specifically. His publication in the Journal of Roman Archaeology formulates the principal phases of urbanism at Butrint in light of Roman imperialism and colonization.