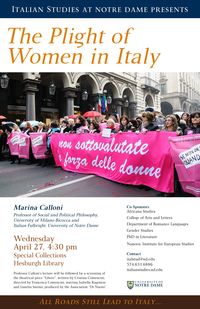 Professor Calloni's talk will be followed by a screening of the theatrical piece Libere, written by Cristina Comencini, Directed by Francesca Comencini, starring Isabel Ragonese and Lunetta Savino, and Produced by the Association "Di Nuovo."

Calloni has been a research fellow at the University of Frankfurt, working by Jürgen Habermas, and senior researcher at the Gender Institute of the London School of Economics and Political Science. She has also been a visiting professor at the universities of Bremen (Germany), Vienna (Austria), Lugano (Switzerland), Hannover (Germany), and Kurume (Japan).

Her research areas include: social and political philosophy; human rights and justice; gender issues; democracy, cultural conflicts and the critique of violence; European citizenship and the public sphere; politics and science in post-socialist countries; international research networks and cross-border co-operation.

This spring, she joins the University of Notre Dame as an Italian Fulbright, teaching political theory in the Department of Political Science.