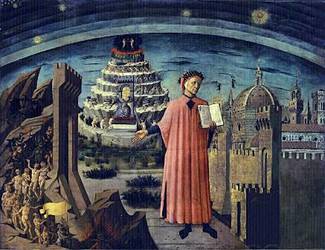 To deepen exploration of the relationship between divinity and comedy as found in Dante and Shakespeare, Robin Kirkpatrick will guide a collective of Notre Dame and local artists that combine literature, dance, theatre, visual art, music, and videography in a structured improvisation that examines how seemingly disparate forms of artistic expression can be unified through a shared journey toward universal truth and divine inspiration.

This is a free but ticketed event. Tickets will be available from April 13th, through the Box Office of the DeBartolo Performing Arts Center.

Before the performance, on Wednesday April 20, at 5:000pm in Special Collections in the Hesburgh Library, Professor Kirkpatrick will deliver a lecture entitled Turning to a Joy. He will explore the relationship between comedy and theology in Dante and Shakespeare. Can their language and imagination contribute to the pursuit of theological questions? Do they together ask us in any way to re-think or experiment with our familiar conceptions of academic study? Can comedy be seen, in Dantean and Shakespearean terms, as a legitimate mode in which to approach the pressing issues of the intellectual life?

Both events are sponsored by the Devers Program in Dante Studies and Shakespeare at Notre Dame.

Robin Kirkpatrick is Professor of Italian and English Literatures and Fellow of Robinson College at the University of Cambridge. His recent publications include a new translation of Dante's Divine Comedy (Penguin, 2006-7); "Afterlives now; A study of Paradiso Canto 28," in Envisaging Heaven in the Middle Ages ed. by C Muessig and A Putter (Routledge 2007); The European Renaissance, 1400 - 1600 (Longman 2002); and English and Italian Literature From Dante to Shakespeare: A Study of Source, Analogue and Divergence (Longman 1995). Professor Kirkpatrick is the founder of P*CEA (Performance, Collaboration and Experiment in the Arts), a Cambridge-based multidisciplinary group bringing together artists in all branches of the arts.

Robin Kirkpatrick's visit is co-sponsored by: Italian Studies at Notre Dame, the Medieval Institute, the Nanovic Institue for European Studies, the PhD in Literature Program, and Religion and Literature.